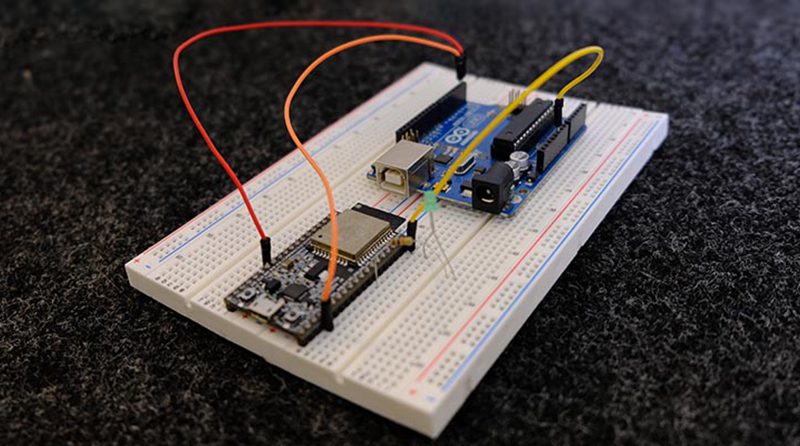 Written by Atmosphere Senior Software Engineer Nicholas Crast We’ve received quite a few requests about how to implement a slave device via UART using Atmosphere, and today we’ve got a simple project that demonstrates how to do it. It’s quick and easy to connect an Atmosphere-supported development board to an existing infrastructure by implementing a UART slave protocol, and it’s done by using Atmosphere Studio’s

This project requires an ESP32 and another UART-capable development board. For this demo, we’ll be using an Arduino 101, although any Arduino-supported board should work with only minor code modifications. Make the following connections between the ESP32 and Arduino 101:

When the connections are complete, your setup should resemble the following:

After the hardware is setup, the Arduino needs to be programmed separately with its own project, which requires access to the Arduino IDE. Within the Arduino IDE, add the following code to a new Arduino project:

NOTE: On the Arduino101, Serial refers to the built-in serial over USB. Serial1 refers to pins 0 (Rx) and 1 (Tx) which are connected to pins IO14 (TX) and IO15 (RX) on the ESP32. Now that the hardware setup is complete, we can build the Atmosphere project.

Creating the project only takes a small number of steps.

In Studio’s Embedded View, add a UART element to the canvas. Set its properties as follows:

This configures the UART driver to buffer all incoming traffic until a string surrounded by {} is received. This will be our command format. Once a string is received, the next step is figuring out which command (if any) is being sent. This can be done using the regex element.

Now add a regex element to the canvas. This element’s job is to determine whether or not the {adc} command has been received. Set the properties as follows:

At this point, you should have something like this:

Now, what happens if the {toggle} command is received?

If the previous ADC regex evaluation fails (meaning there was not a match) then it will execute the Pattern Does Not Match trigger, passing along the string. Using this, we can chain regex elements together. Add a second regex element into the canvas. This element’s job will determine whether or nor the {toggle} command has been received. Set the properties as follows:

So we have these two commands, how about we make them do something?

ADC pin element into the canvas, and set the properties as follows:

Connect the ADC regex element to the ADC pin element, then in their connector set the Pattern Matches trigger of the ADC Regular Expression element to the Read Voltage ability of the ADC element. At this point, your setup should resemble the following:

At this point, when the {adc} command is received, the ADC is read. The next step is to send that data back to whichever element sent the command.

Before we send a response, the ADC reading must be converted into a string. Add

a data type conversion element into the canvas, and set the properties as follows:

That takes care of the ADC. The last thing to tackle is the toggle command via GPIO.

GPIO pin element to the canvas, and set the properties as follows:

Compile and program your finished ESP32 project, and then start the Arduino project after the ESP32 project has booted. On the Arduino serial monitor, you should see an ADC reading every few seconds. To learn more, or to try a slightly more advanced version of this demo, head over to Atmosphere Studio and open the “UART Slave Demo” example project. This demo implements the base of this project while also integrating some cloud features.